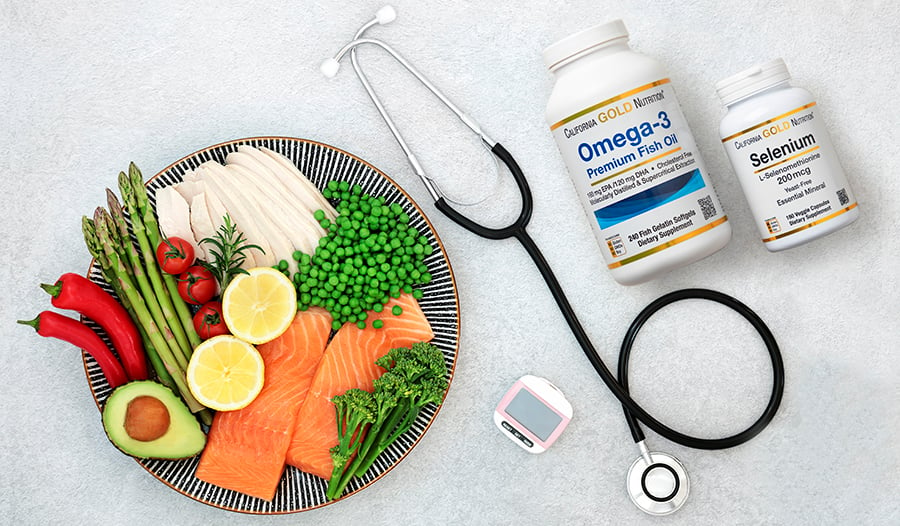 Insulin resistance (IR) is very common yet rarely diagnosed, affecting hundreds of millions of people around the world. While there may be genetic predispositions to this condition, like a family history of type 2 diabetes, it is primarily caused by a sedentary lifestyle combined with a high-sugar diet. There are symptoms commonly associated with insulin resistance, and in some cases, these symptoms contribute to the actual cause.

Sometimes cells in the liver, fat, and muscles are resistant to the insulin hormone secreted by the pancreas. When this occurs, the body can’t regulate the amount of sugar allowed into the bloodstream to create energy and how much to store for future needs. The pancreas then begins to produce more insulin, and blood sugar continues to rise.

Lifestyle changes that can help prevent, reverse, and manage insulin resistance include:

Metformin is frequently used for prediabetes and diabetes. This medication helps make insulin produced in the body more efficient. Since most women with polycystic ovarian syndrome have insulin resistance, this medication may help restore a woman’s menstrual cycle back to normal.

Berberine is extracted from the barberry (berberis vulgaris) shrub, which contains plants that are both evergreen and deciduous. Found throughout Europe, North Africa, the Middle East, and Asia, barberry produces berries rich in vitamin C, which provides a whole host of health benefits.

Berberine, the active ingredient of the shrub, is consumed as an herbal food and supplement. It has been shown in scientific studies to have various health benefits. It is commonly used in Traditional Chinese Medicine (TCM) and ayurvedic medicine.

Berberine may reduce insulin resistance and lower blood sugar. In addition, it has antioxidant properties, which can help reduce inflammation and may be beneficial in the prevention and treatment of those with cardiovascular disease. A 2017 study suggested that berberine may exert part of its effects by positively influencing the gut microbiome.

A 2015 study in the Journal of Ethnopharmacology showed that berberine could be helpful in lowering blood sugar and total cholesterol levels. In addition, it seemed to help elevate HDL (good) cholesterol, which is associated with protection against heart attacks.

A 2012 study showed that berberine could be helpful in improving insulin sensitivity, which ultimately helps to lower both blood insulin and glucose levels.

Scientists have shown that berberine can also have beneficial effects on the gut microbiome by promoting the growth of healthy gut bacteria.

Chromium is an important element required for numerous enzyme reactions, including an enzyme called the glucose tolerance factor, or GTF. This enzyme helps optimize insulin function and glucose control.

A 2017 meta-analysis study in the Journal of Trace Elements in Medicine and Biology concluded the supplementation with chromium picolinate had beneficial effects in reducing body mass index (BMI), fasting insulin levels, and total testosterone levels in women with PCOS.

Likewise, a 2015 double-blind, placebo-controlled trial in the Annals of Nutrition and Metabolism showed that chromium supplementation lowered insulin levels in women with polycystic ovary syndrome. Those who took the chromium also saw improvements in their cholesterol profile. A 2016 study also showed that chromium picolinate could reduce insulin resistance in female patients while also helping control their menstrual cycles.

A 2018 study demonstrated that chromium could lower insulin resistance in women with diabetes and polycystic ovarian syndrome. This important trace mineral should be considered by anyone trying to improve their metabolic profile.

NAC is an important nutrient that helps the body to eliminate toxins, especially those in the liver. Doctors give it to patients hospitalized in response to acetaminophen/paracetamol (Tylenol) overdose. However, taken as a supplement orally, it can help remove everyday environmental toxins as well.

A 2015 meta-analysis study published in Obstetrics and Gynecology International showed that women with insulin resistance and PCOS who were given NAC were more likely to ovulate, become pregnant, and deliver a baby compared to women who were given a placebo pill. There were no negative effects seen in the women who took the NAC.

L-carnitine is an important amino acid found in high concentration in both the muscles and brain. Along with playing an important role in the production of energy and metabolism, it could also have a positive effect on insulin regulation.

A 2015 randomized, double-blind, placebo-controlled study of 60 women with PCOS and insulin resistance was conducted. All were considered overweight. Half of the women were given 250 mg of L-carnitine, the other 30 women were given a placebo pill. Both groups were followed for 12 weeks, and at the end of the period, those who took the L-carnitine saw a reduction in weight and waist circumference and had lower blood sugar, meaning their insulin resistance improved.

A 2014 study in the European Journal of Obstetrics and Gynecology and Reproductive Biology demonstrated that women with PCOS who were resistant to clomiphene (a prescription drug that can help a woman become pregnant), were more likely to become pregnant when 3,000 mg of L-carnitine was added to their daily drug regimen. This is an excellent example of using both nutritional supplements and prescription drugs to achieve the desired health goal of reducing insulin resistance. While this study was specifically conducted in women, men with insulin resistance are also likely to benefit.

CoQ10 is a  popular supplement that plays an important role in energy metabolism. It is commonly taken by those on prescription cholesterol-lowering medications but studies show it may also be helpful in those with insulin resistance, prediabetes, and diabetes.

A 2017 double-blind, placebo-controlled study in Clinical Endocrinology evaluated the use of 100 mg of co-enzyme Q10 versus placebo in women with insulin resistance. The subjects underwent blood tests, took the supplement or placebo for 12 weeks, and then underwent repeat blood testing. The results showed that those who took the co-enzyme Q10 had a reduction in blood sugar and insulin levels, which are both normally high in those with insulin resistance and PCOS.

A 2018 double-blind, placebo-controlled study out of Korea also found benefits. In the study, 80 patients with prediabetes were separated into two groups. Half took a placebo while half were given coenzyme Q10. Those who were given the supplement saw a reduction in their insulin resistance, leading the researchers to conclude that coenzyme Q10 may slow the progression to diabetes.

Omega-3 essential fatty acids consist primarily of eicosapentaenoic acid (EPA) and docosahexaenoic acid (DHA). These important nutrients can be found in a variety of food sources, which include fish (mackerel, cod, and salmon are among the richest), walnuts, chia seeds, flax seeds, hemp seeds, avocado, and natto.

A 2009 study showed that women with PCOS and insulin resistance who had a fatty liver could reduce the amount when omega-3 fatty acids were consumed. The researchers also noted an improvement in blood pressure and triglycerides.

Selenium is a trace mineral, meaning that it is required in small amounts by humans. It must be consumed through diet or by taking vitamins and minerals. It is a powerful antioxidant that is not only important for brain health but also thyroid health, helping to support an optimized immune system. Dietary-wise, Brazil nuts are one of the best sources of selenium available.

According to a 2013 study of women in Turkey, those with PCOS and insulin resistance had lower selenium levels in their blood when compared to women without the condition. It is believed that this mineral deficiency plays a role in the cause of PCOS and the regulation of hormone and insulin levels.

A 2014 randomized, double-blind, placebo-controlled study showed selenium could be helpful in women with PCOS. Specifically, selenium could lower insulin levels and help improve cholesterol profiles, such as lowering triglycerides and LDL (bad) cholesterol.

Taking more than the 200 mcg daily dose is not recommended, according to studies

20,083 Перегляди
Studies are helping to combat the obesity epidemic by offering clues about why we gain weight and the best ways to lose it.

How to Relieve Allergies Naturally

32,683 Перегляди
The change of seasons can sometimes bring more than just a shift in the weather or a transition of colors. For the hundreds of millions of people worldwide who suffer from seasonal allergies, it brings aggravating symptoms like sneezing, stuffy nose, sinus pressure, and watery eyes.