Your email is being processed.

Flash Deals are limited time, limited quantity promotions, so act fast! Limited to: 1 unit of 1 flash deal product per order. If you order more than one unit or re-order or order other flash deals, you will pay our regular low price. Flash Deals are ineligible from all other promotions.


Due to limited vendor inventory related to COVID-19, maximum order quantity per item may be limited based on product. Qty in cart will be auto-updated to reflect COVID-19 item restrictions. This temporary measure ensures that our products can be more equally distributed among our valued customers.

Sorry, this product is no longer in stock.

Sorry, this product is no longer in stock. 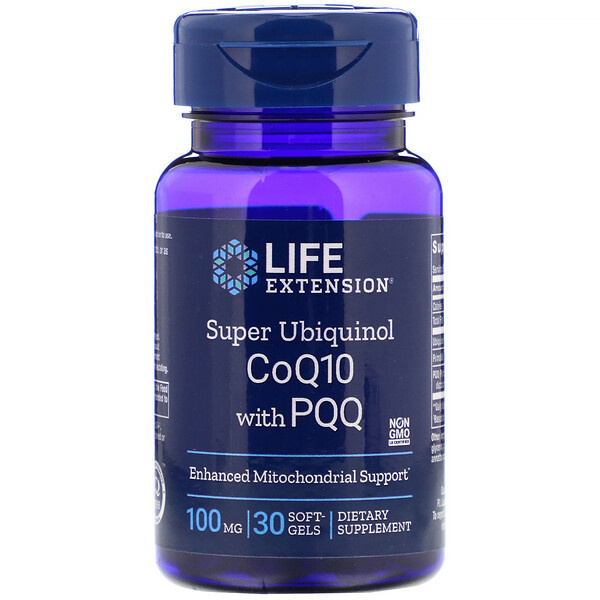 By Life Extension
62 Reviews | Write a Review
In Stock

Super Ubiquinol CoQ10 with PQQ is formulated with the highly bioavailable ubiquinol form of CoQ10 and is augmented with PrimaVie® shilajit and PQQ to promote cardiovascular health and help promote youthful cellular energy production.

Heart cells need CoQ10, but so do other organs. That’s why CoQ10 is also highly concentrated in the brain, liver and kidneys.

CoQ10 (or coenzyme Q10) is an essential nutrient your body requires for healthy mitochondrial function, a process that produces body energy at the cellular level. Because of this, it makes sense that CoQ10 is concentrated in high-energy organs such as your brain, liver, kidneys and the heart.

The traditional ubiquinone form of CoQ10 is difficult for the body to absorb. That’s why Life Extension offers a highly bioavailable form of ubiquinol CoQ10 in a patented delivery system shown to absorb up to 8x better than ubiquinone. In people taking this form of ubiquinol, high levels of plasma CoQ10 can be achieved in only four weeks.

Antioxidant power. PQQ is a potent antioxidant and its molecular stability enables PQQ to facilitate thousands of antioxidant reactions in the mitochondria, without breaking down, for maximum antioxidant and bioenergetic support.

In a pre-clinical model, ubiquinol was up to 40% more effective at slowing measurements of aging compared to ubiquinone. In another pre-clinical study, the combination of CoQ10 and shilajit produced a 56% increase in cellular energy production in the brain—40% better than CoQ10 alone. Muscle tissue saw a 144% increase, which was 27% better than with CoQ10 by itself.

Read the entire label and follow directions carefully prior to use.

Take one (1) softgel daily with food, or as recommended by a healthcare practitioner.

While iHerb strives to ensure the accuracy of its product images and information, some manufacturing changes to packaging and/or ingredients may be pending update on our site. Although items may occasionally ship with alternate packaging, freshness is always guaranteed. We recommend that you read labels, warnings and directions of all products before use and not rely solely on the information provided by iHerb.

Visit Manufacturer's Website
iHerb Customer
An iHerb Customer has completed a transaction, and has accepted the Terms & Conditions